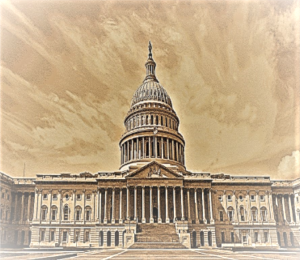 Over the past quarter, the United States economy has shown much needed improvement each month as we further distance ourselves from the national lockdown which took place back in April.  The gradual economic re-opening coupled with historic fiscal and monetary support has paved the way for our economy to move forward after enduring a major blow when the economy was essentially turned off.  Fortunately, the American work force is resilient and is one of the major backbones of this Country.  Since the lockdown, consumers and businesses have quickly adapted by utilizing new technologies and remote working protocols.  In the process, many companies have developed new strategies which they will leverage even after our country triumphs over the pandemic.

Recent economic data shows improvements in multiple major sectors which endured a substantial blow following the national lockdown measures.  Unemployment peaked in April to 14.7% which has since declined each month to its current rate of 7.9% as of the end of September according to the U.S. Bureau of Labor Statistics.  Retail Sales have been climbing in recent months and are currently 2.2% higher than at this point last year.  The corresponding rebound in sales tax revenue together with a growing economy is expected to provide much needed help for state and local governments whose budgets have been under pressure this year.  In August, pending home sales outperformed projections by more than double and posted its highest monthly increase since 2006.  Most of these positive trends are expected to continue as the economy gradually opens back up.  However, the United States still has many major obstacles to navigate through to get our economy back to where it was before the coronavirus pandemic. 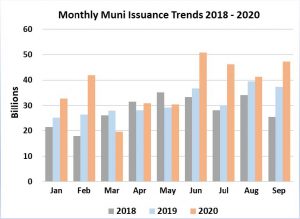 In mid-September, the Federal Reserve announced it would continue to keep interest rates at historical lows for the foreseeable future unless inflation sustainably exceeds their 2% target.  In an attempt to support the U.S. economy, this year the Fed has purchased more than $1 trillion in agency mortgage-backed securities and over $3 trillion in U.S. Treasuries.  These quantitative easing measures which increase the nation’s money supply will continue in the coming months.  The Fed also announced it intends to continue purchasing $120 billion per month in U.S. Treasuries and agency mortgage-backed securities.  As the economy continues to improve, the Fed should be able to gradually decrease their quantitative easing measures.  Hopefully this occurs sooner rather than later as the United States outstanding debt, now totaling almost $27 trillion, will burden the American taxpayers for many decades to come.

Municipal debt issuances have continued to surge over the past four months spurred by low interest rates and a very favorable funding landscape provided by the Fed.  September’s municipal issuances increased over 26% compared to September 2019 and represents the highest September issuance volume since the mid 1980’s.  Many experts are anticipating another record setting month of issuances in October as municipalities want to utilize the current low interest rates to fund projects for their constituents and refinance existing debt at lower borrowing costs.

This year hasn’t been easy to say the least and will be a year talked about for centuries.  Americans have been tested over and over throughout history.  At this moment in our history, it’s important to remember, true character is revealed by actions taken when faced with adversity.  John F. Kennedy once said it this way, “There are risks and costs to action.  But they are far less than the long range risks of comfortable inaction”.